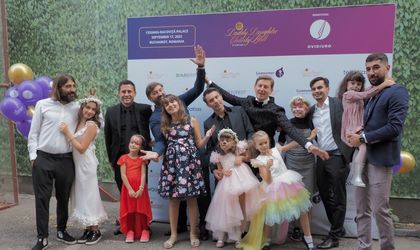 During the third edition of the Daddy Daughter Charity Ball event, organized this year in support of Asociatia OvidiuRo, 50 fathers and their daughters of all ages joined forces to equip the libraries in the kindergartens where children without material possibilities from vulnerable rural areas learn.

“Beside raising awareness and money for the social cause we chose, the purpose of our charity ball is to raise our children in the spirit of philanthropy. We want them to learn to give much more than they received and will receive throughout their lives. There are a lot of children in Romania who have nothing or very little so the cause we chose to support this year and for the foreseeable future is “Read me 100 stories!”, a campaign initiated by the Asociatia OvidiuRo. Over the past two years, 475,000 books were purchased from the top ten children’s publishing houses and were put into the hands of 200,000 children learning at  the 1,966 kindergartens across Romania, which completed the certification process. All this was made possible through the hard of work of ten wonderful OvidiuRo employees and with the support of two million euros provided by several major donors and a few dozen smaller donors, said Mike Costache, co-founder of the Daddy Daughter Charity Ball.

Many of the fathers involved in this event chose to “adopt” a kindergarten bearing their family name, dedicated in the name of their daughter(s), in exchange for 13 monthly donations of 100 euros or 1,300 euros donated in advance. This is how much it costs to equip such a Kinder Library and to train the educators how to properly read children the various 100 stories. The breakdown of the €1,300 is as follows:

“On behalf of the small team of just ten colleagues, we thank you all for joining the cause we are working on. Thank you for making it possible to continue the ‘Read me 100 stories!’ project, through which we contribute to the early education of children, a vital element for Romania’s future. We are grateful for the contributions of each of you,” said Maria Gheorghiu, executive director of the OvidiuRo association.

The Daddy Daughter Charity Ball was organized on September 17, at the Cesianu-Racovița Palace. The event, now in its third edition, is part of a series of charity balls and is dedicated to fathers and their daughters. The event was attended by 50 fathers in top management positions in national and international companies, together with their daughters of any age, to celebrate their relationship in a highly appreciated concept that contributes to educating and preparing children for the challenges of life whose beginnings lie in a promising way before them.

This year, the money raised, primarily with the support of partner companies, will be allocated to the OvidiuRo association, with the purpose of stimulating reading among kindergarten children.